Last year I was invited to photograph at a psychiatric hospital that was being prepared for demolition. Much of the equipment had been removed, but I was amazed by the number of contextual pieces that were still present; these indicated to me the residency of the hundreds, if not thousands of patients who had passed through the wards that I had access to, and I felt compelled to attempt to represent those people who had resided in the hospital with my Conceptual Portraits.

The photographs I include here are only a small representation of the hundreds of images I took over several visits. The artifacts, the infrastructure and the semiotics of human activity inspired me to produce a body of work, that I present here.

The images I have selected embrace what I, as a photographer, observed on the day I took the photographs and I offer these images to the viewer to contribute their own interpretations on my photographs. 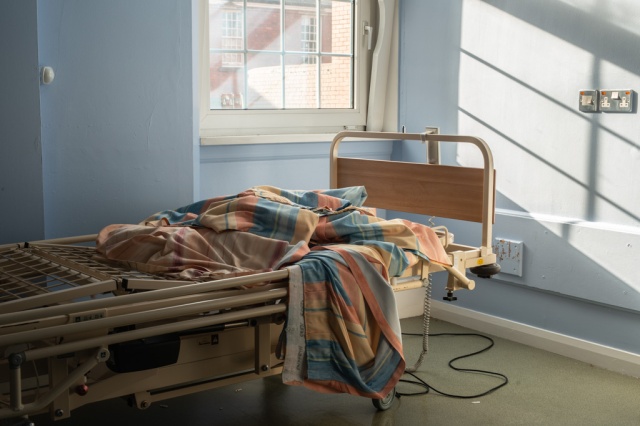 When I entered this ward the bed had the appearance of someone having just got out of it, I was left wondering where that person was and I felt an immediate connection with the people who had occupied this bed space over the past eight decades. What also intrigued me were the window glazing bars and the shadows on the wall, these suggested the bars of a prison cell; was this impression of the inmates? The view from the window was not of open countryside, but more institutional secure buildings and confinement. Is that what the patients felt? Additionally I observed the power cable snaking its way to the bed and the wall-mounted power points, which to me hinted at the ECT (Electroconvulsive Therapy)of the early 20thcentury. 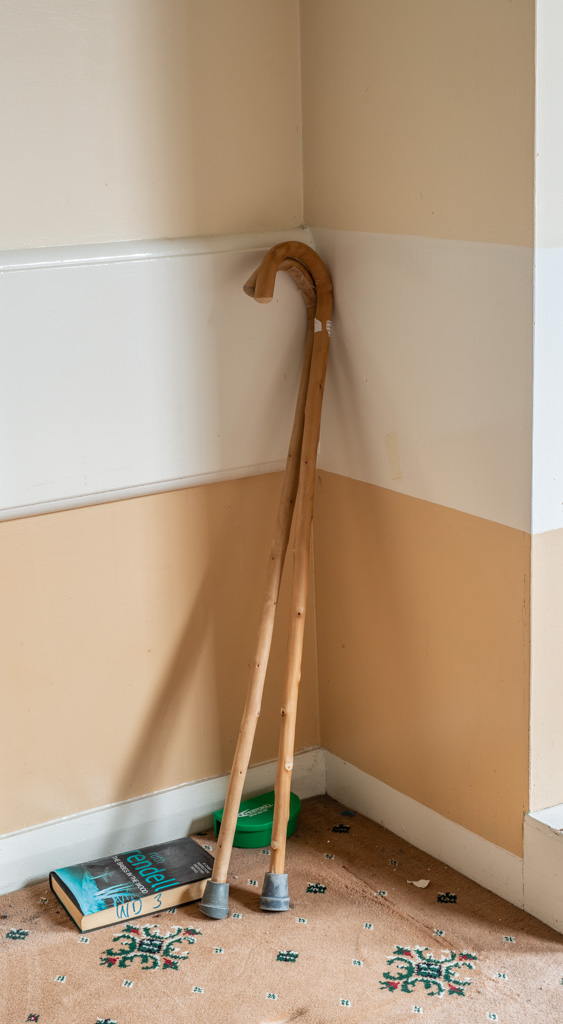 On seeing these walking sticks I immediately conjured-up a mind-view of the last person to use them. Where is he or she now? Did that person ever finish reading the Ruth Rendell mystery novel? Where is that person? Is he/she alive, healed? I have a vision of that person wandering about the facility. 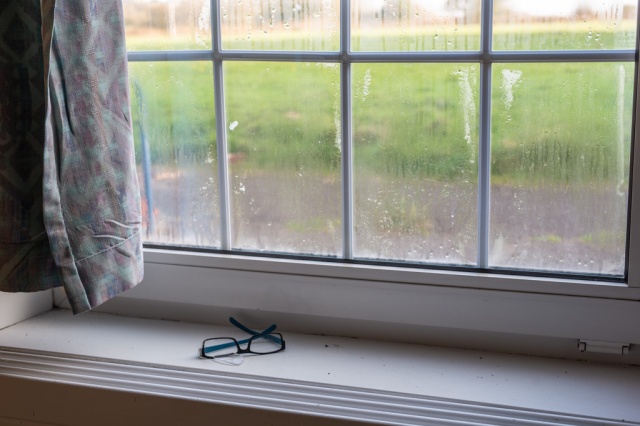 fig#3 Whose spectacles are these?

Spectacles are very personal; they are produced for an individual. Where is the person that had these spectacles made? They have just been abandoned on the windowsill as though someone is coming back for them, despite the fact that they are damaged with one of the lens pushed out. No matter how good the spectacles may have been they would not of enabled the wearer to see through the double glazed widow with condensation between the panes. The openness and green grass of the hospital grounds are tantalizingly close beyond the locked widows, but still out of reach.

I was given free access around the building and discovered three random chairs arranged as if engaged in conversation. I couldn’t help my imagination considering three people who may have been sitting there deep in conversation about the food or the weather or maybe the decoration. Or is it the chairs that are in conversation? “Have you seen the state of my arm rests?” “My wheels squeak”. 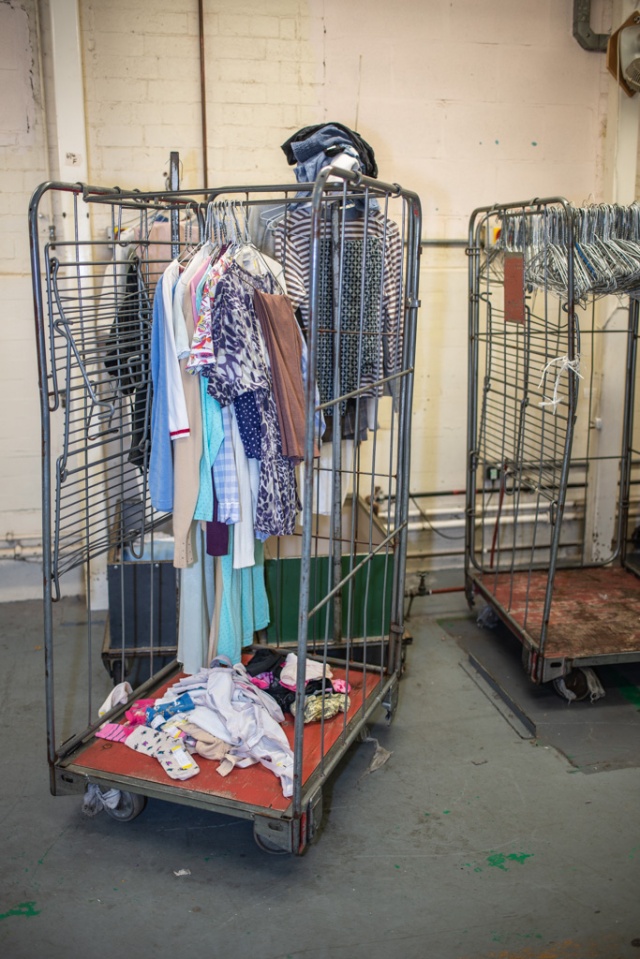 Within the hospital complex was a large laundry, which at the time was in the process of being stripped-out for resale or disposal. Scattered around the laundry were trolleys of clothing, which captivated me. Whose clothing is this? Where are those people now?

By close inspection of the clothing one can begin to extrapolate an idea of gender or even a guess at the age of the owners. The semiotics of clothing can provide a wealth of indicators of the person wearing them and I endeavored to visualise these people.

In one corner of the laundry was a large cabinet, which interested me. I tried to peer through what appeared to be a door and gently touched a button, at which point the large door swung open and rotated, reveling this electric-blue effigy. On closer inspection it appeared to me to be some sort of clothes shaper. It made me think about all the clothing of all the patients that had been exposed though this process. I found this a very powerful representation of the hundreds of patients whose clothing had been exhibited in this manner. It was almost like an endless parade of patients as the door rotates to reveal another patient. 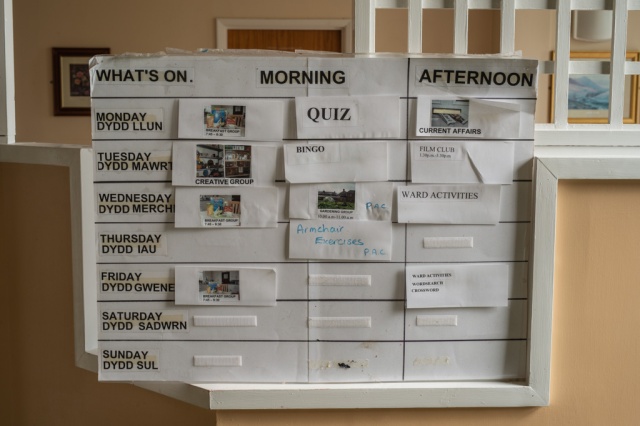 Seemingly abandoned in one of the communal rooms was this Activities Board. Presumably the staff had configured the board; it offers us an appreciation of anticipation for the patients of this ward. I think one can begin to grasp a sense of life on the ward and the activities that occupied their days. We can begin to image patients engaged on group activities, enjoying a sense of well-being, participating in shared pastimes.

The corridors and wander-about-spaces were all very stark and uninviting with occasional indicators of the outside world. Perhaps this shopping experience helped to fill the days for the patients. I can only begin to image the boredom of long stays in hospital.

I spent a long time reading these cards from well-wishers and cards of ‘Thank you’ to the nursing and ‘hotel’ staff. They were bright, uplifting and cheerful in an otherwise dreary and uninspiring place. The personal messages gave me a glimpse into the world of many patients and their families and enabled me to reflect and imagine the personalities from the many signs of habitation that I had discovered in the wards and service departments.

Within the hospital building is a huge kitchen and in the clutter and vastness of the pot-wash department stands a large cantilevered hand-held washer. In this arena of over-sized domestic paraphernalia, the washer stood-out as a metaphor for ‘aloneness’. Everything else; life, is out of focus, a blur.

In an abandoned office I found this assortment of keys; to me they signified the secure nature of the hospital. Every door is locked, access denied. To enable me to get around the hospital I had to request entry and at times I was accompanied as I photographed. I had the feeling of being contained.

The hospital has an amazing art department where patients are encouraged to express themselves and experience different media and techniques. I found this artwork of a head very compelling and I was immediately drawn to it and asked myself the question; is this a self-portrait? Where is he now? This portrait is very engaging and compels the viewer to examine the face and consider the person behind the mask, the artist, he looks a very neat and well-groomed man, appearing self-assured and at ease with himself.

There is a long passageway that provides access to the larger wards and administration offices. Along the full length of this passageway, at dado height, there are these amazing mosaics, all of which have created by patients. I found this an incredibly powerful representative symbol of every person who had ever stayed in the hospital during the 80-year history of the establishment. Each tile is a work of art and needs to be displayed in an art gallery or at least an exhibition. I can imagine each person painstakingly designing and creating a tile and feeling immensely proud of his or her creation. It is a scene that will remain with me. I can only hope that someone will see the value in them as pieces of art and as a representation of the patients and treat them with the respect they deserve and that they do not end up as land fill. 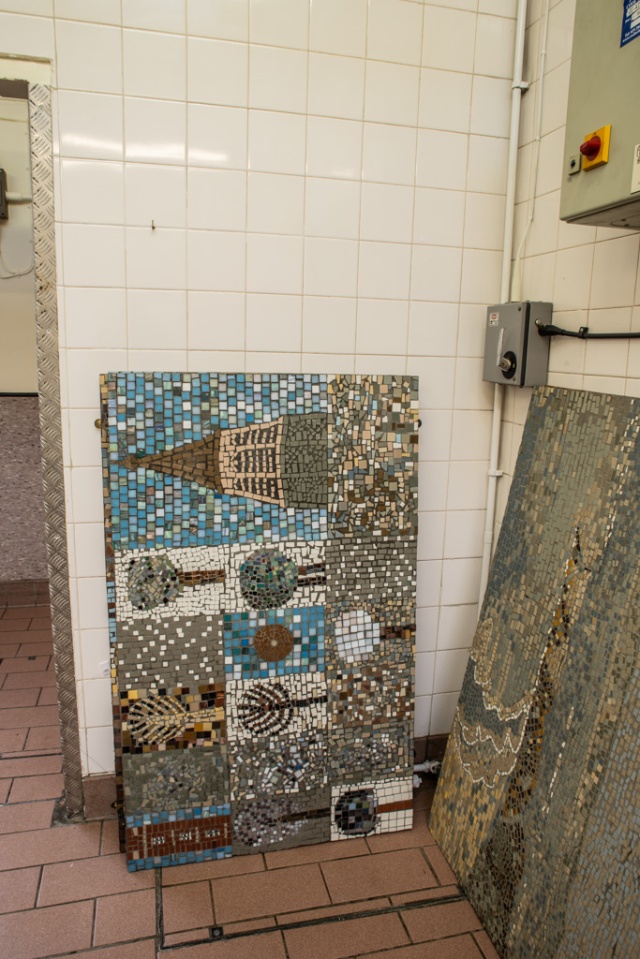 I found several, larger, mosaic panels stacked against walls in the kitchen; presumably someone has seen some value in these amazing tiles, although at the time of photographing they looked somewhat abandoned. The intricate work that went into the making of these remarkable mosaics has to be saved and reassured – we can only hope.

It was a wonderful opportunity to photograph in this hospital and the chance to experience the presence of the patients.